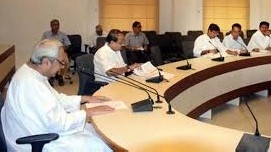 Published : The Times of India

Odisha government  announced to name Rs 6,600 crore mega lift irrigation scheme after popular freedom fighter Parbati Giri. A proposal in this regard was approved at the state cabinet meeting headed by Chief Minister Shri  Naveen Patnaik. Smt. Giri, born in Bargarh district is known for his contribution to the freedom movement of the country. For his unconditional support to the poor and downtrodden communities, she is also known as the Mother Teresa of Odisha.