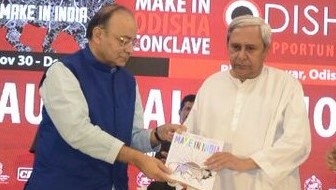 Union finance minister Arun Jaitley said Odisha, which is part of the eastern block of States that are traditionally considered slower in the economic growth process, has managed to bring down the number of poor by half in the two decades.If the State continues to grow at a pace faster than the national rate, its potential to wipe out poverty in the next one and half decades would be significantly high, he said at the Plenary Session of Make in Odisha Conclave here.