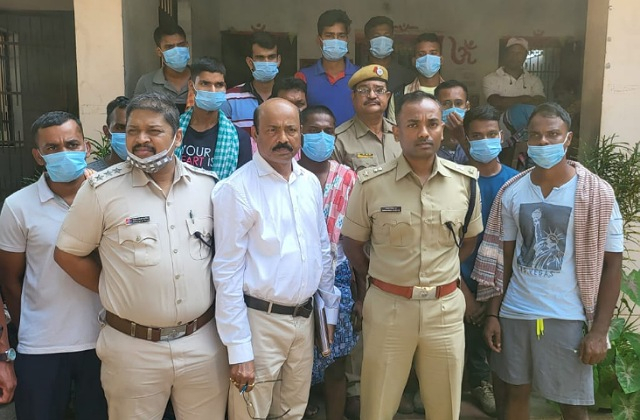 Keeping in view the increasing number of complaints regarding Dalals in government hospitals, the Berhampur Police has swung into action with an innovative way.

Some Berhampur Police personnel disguised themselves as common men and patients to trap the Dalals at the MKCG Medical College and Hospital.

Repeated complaints were received from general public and patients coming to MKCG that some Dalals were taking patients who come for treatment at MKCG to outside Labs, diagnostic centers, medical stores and even hospitals for treatment under BSKY.

The police team was successful in nabbing six culprits who were inducing the people coming to MKCG, MCH, Berhampur to get their treatment at private clinics and hospitals, medical stores and diagnostic centers. They were misguiding people saying that there is no facility at the Govt Hospital for better treatment. The culprits were also collecting money from gullible patients and their relatives in the name of facilitating better and free treatment at MKCG, MCH, Berhampur. Total 15 police personnel including SDPO, Berhampur Town, IIC, Baidyanathpur Police Station, and SI In-charge of Medical Out Post took part in this raid. Six accused persons have been arrested and forwarded to the court. Investigation is continuing. Police teams will be deployed at the Hospital to keep a watch on Dalals, the Berhampur SP informed.