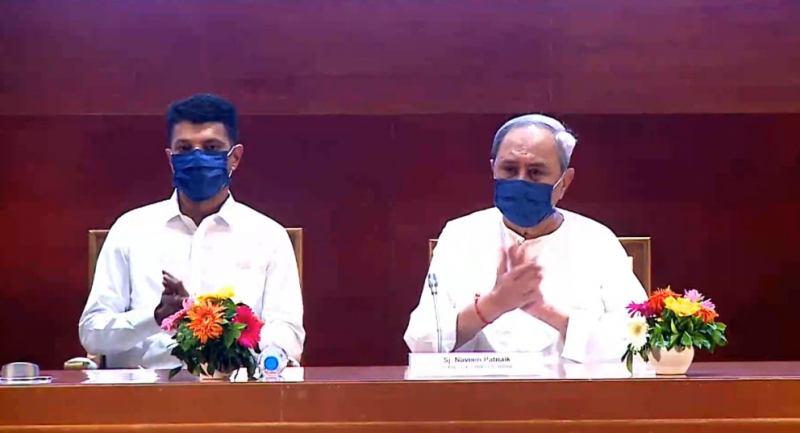 As many as 384 Banking Assistants were inducted today in 15 District Central Co-operative Banks in presence of Chief Minister Naveen Patnaik.

Besides, he also launched online operations in Primary Agriculture Cooperative Societies. With this, 2063 PACS came under the Core Banking Solution platform.

Speaking on the occasion, the Chief Minister said that this is the first of its kind initiative in the entire country. Terming this an historic moment for the Co-operatives of the State, he said it would bring about efficient and transparent service delivery in the field of banking, credit and other operations.

He added that Co-operative Banks and PACS provide around 60 percent of the total crop loans disbursed in the state. He appreciated the fact that almost the entire paddy procurement operations and procurement of other agricultural produce are done by these PACS.

Speaking on the initiatives of his government in strengthening cooperatives in state, he said that the government has been providing share capital assistance to the Co-operative Banks and PACS in order to build up a strong capital base for them. The Government is also providing interest subvention support to the farmers.

He further said that Core Banking Solutions and computerised operations of PACS have been included as important 5T interventions of the state. Congratulating the new Banking Assistants, he advised them to follow the 5T initiative as it carries special significance for the cooperative sector.

Speaking on Odisha State Warehousing Corporation, he said, it provides logistic support for storage of food grains for distribution under PDS and other welfare schemes of the Government. He congratulated the newly inducted 28 personnel of the Corporation and hope they will work with sincerity and efficiency to strengthen the system.

During the programme, the OSWC paid a dividend of Rs 3.07 Crore to the government.

Speaking on the occasion, Cooperation Minister Atanu Sabyasachi outlined the steps taken by the department to strengthen cooperative sector. He said computerisation of Coop Banks, PACS will bring revolutionary changes in Coop sector, and farmers’ financial inclusion will improve rapidly.

Three newly appointed persons Jayashree Soren, Biranchi Narayan and Sandeep Sourav, sharing their experiences, said that they are amazed with the transparency and speed with which such a huge recruitment process was carried out. They thanked the Chief Minister for the 5T initiative. They committed themselves to absolute transparency and commitment to serve the people of Odisha, especially farmers.

APC Shri Sanjeev Chopra, Secretary to CM (5T) VK Pandian among others were present on the occasion.

Secretary of Cooperation Sanjeev Chaddha gave the welcome address and MD OSCB offered the vote of thanks.

It may be mentioned here that the Cooperative Banks and PACS provide banking and credit services to the people at the grassroots level. The PACS and LAMPCS disburse crop loans for seasonal agricultural operations to the farmers through Kisan Credit Cards and to the tenant farmers, share croppers, oral lessees etc. through Self Help Groups and Joint Liability Groups. The government is facilitating disbursement of crop loans up to Rs.1 lakh free of interest.

Credit support is also provided to the farmers for asset creation in agriculture under farm mechanization, land development, horticulture, animal husbandry, fishery etc. In addition, farmers in the State avail the services of inputs supply like seeds, fertilizers, pesticides along with marketing of their agricultural produce viz. paddy, oilseeds and pulses through these PACS and LAMPCS.