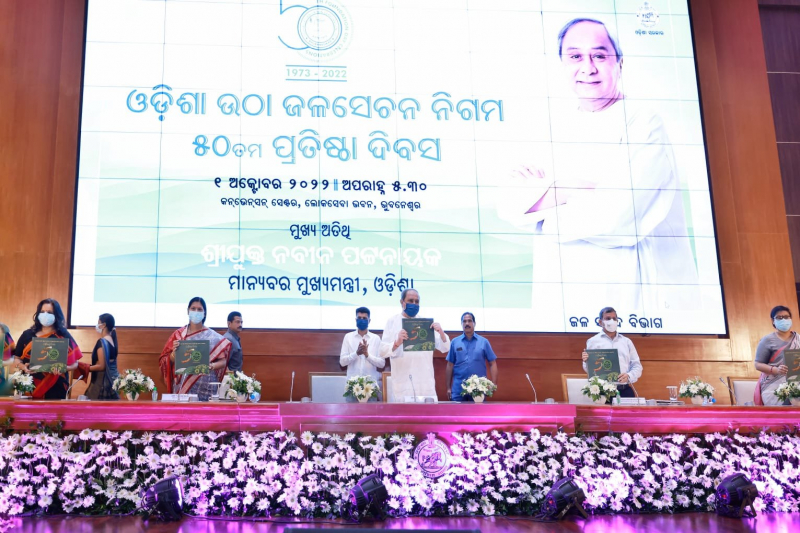 Chief Minister Naveen Patnaik has said that Odisha Lift Irrigation Corporation has become an indispensable organisation of the State in the last 50 years. It has played significant role in providing the critical component of water to farmers.

The Chief Minister said this while attending the 50th foundation day celebration of OLIC at State Convention Centre in Lok Seva Bhawan.

The Chief Minister urged the organisation to follow the 5T Principles in bringing out transformation in lift irrigation sector.

It may be mentioned here that the OLIC was established on October 1 1973. Over this last fifty years, OLIC has contributed to 30 percent of the total irrigation facility of the state by irrigating over 13.50 lakh hectares of cultivable land.

Speaking on the transformation of the state in food grain production, he said that known for food deficiency and poverty a few decades ago, Odisha has now become a food surplus state and the third largest supplier of food grains to our country’s public distribution system.

He added that our progressive policies in the farm sector has a transformative impact. Sustainability, crop diversification, improved water provision and use of technology are changing the way of farming. He appreciated the role of OLIC in providing the critical water component.

Highlighting the importance of water, he said that water is life; the soul of earth. It creates and nurtures life. It is critical to our food chain mechanism.

He further added, in an agrarian state like ours, farmers are the backbones of our food security system. We need assured and uninterrupted water supply for enhancing productivity and improve livelihood of our farmers. We have conceptualized various irrigation projects in the State to achieve our objective in this direction, he stressed.

Extending warms greetings on the occasion, he said that providing irrigation facilities in the minimum possible time and that too with minimal expenditure in all the 30 districts require hard work and commitment.

He expected the organisation to follow the 5T Principles in bringing out transformation in lift irrigation sector.

He advised the employees to understand the issues of farmers. “Understanding farmers’ problems and quickly addressing their issues can greatly enhance the confidence of farmers in the system.”

He hoped that all the officers and staff will work with commitment as a team to become the most efficient and dependable organisation for farmers in the state.

The Chief Minister launched E-Lift and ERP automation for the OLIC. He also dedicated a Toll Free No. for customer relationship centres. He released a commemorative book on the occasion.

Speaking on the occasion, Water Resources Minister Tukuni Sahu highlighted the vision of Chief Minister Naveen Patnaik for the development and empowerment of farmers. She said that OLIC has achieved phenomenal success in providing irrigation facilities.

Chief Secretary Suresh Chandra Mohapatra said that OLIC has set up over one lakh bore well till now and will set up another one lakh in next five years. He said that the OLIC has significant role in enhancing the income of farmers in the state.

Additional Chief Secretary Water Resources Anu Gerg highlighted the achievement of OLIC in her welcome address. She said OLIC has a significant role in helping farmers for crop diversification.

OLIC MD Archana Patnaik offered the vote of thanks.