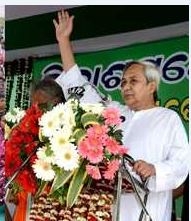 President and Chief Minister shri Naveen Patnaik announced to disburse the due amount of KALIA money at a row on the first day of formation of government by Party. “The genuine beneficiaries under KALIA scheme will get the two-installment money of Rs 10,000 in one time, if the party is voted to power in Odisha,” said Patnaik during his election campaign rally at Jeypore.